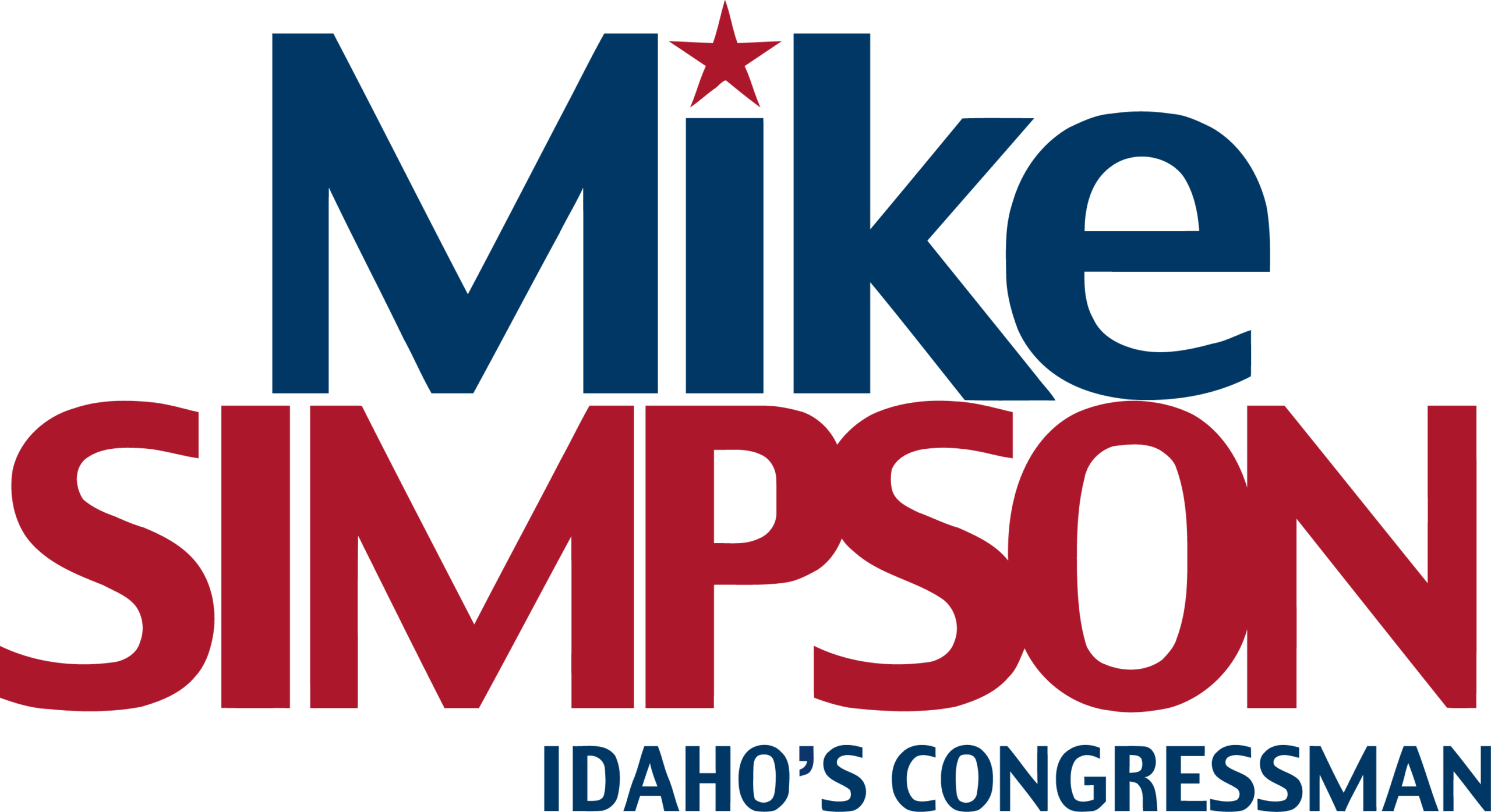 Mike Simpson is serving his twelfth term in the U.S. House of Representatives fighting for Idaho’s Second Congressional District and our conservative values.
Mike serves on the House Appropriations Committee. He is the Ranking Member for the Subcommittee on Energy and Water Development. He also serves on the Interior and Environment Subcommittee. These committees have jurisdiction over funding for a number of programs critical to Idaho, including the Department of Energy, the Department of the Interior, the Forest Service, our National Parks, the National Endowment for the Arts, and Smithsonian Institute.

Mike is one of the House’s leading advocates for a new energy policy and a renewed commitment to research and development of improved nuclear energy technologies. Mike also notably was responsible for delisting wolves in Idaho during his time as Chairman of the Interior Appropriations Subcommittee. Other major Simpson wins include keeping sage grouse off the endangered species list, blocking the Obama Administration’s Waters Of The U.S. rule and proposed closure of the Dubois Sheep Station, as well as reigning in the Obama EPA. Mike also fought hard for and won a fix to fire borrowing, having authored the Wildfire Disaster Funding Act. Mike’s leadership led to historic forest management reforms, most notably treating wildfires like other natural disasters.

More recently, Mike authored the framework for the “”Great American Outdoors Act,”” (GAOA) to secure permanent funding for the Land and Water Conservation Fund, which is a critical program to conserve public lands and improving outdoor recreation opportunities. His legislation also created a new fund to address the backlog of deferred maintenance in National Parks, National Forests, Bureau of Land Management assets, Wildlife Refuges, and Bureau of Indian Education school construction. The GAOA garnered wide support among outdoor industry groups, passed with wide bipartisan support, and was signed into law by President Trump.

Mike has always fought for Idaho’s agriculture industry. He introduced the Farm Workforce Modernization Act (FWMA) with a bipartisan coalition of Members of Congress and the support of 300 agricultural groups. This bill addresses the issue undocumented agriculture workers, reforms the broken H-2A program, and makes agriculture work subject to mandatory E-Verify, one of the strongest mechanisms to combat illegal immigration. The FWMA passed the House of Representatives with Republican support in 2019 and again in 2021.

Mike’s political career began in 1980, when he was elected to the Blackfoot City Council. In 1984, he was elected to the Idaho Legislature where he served until 1998, the last six years serving as House Speaker. Mike was born in Burley and raised in Blackfoot. He graduated from Utah State University and earned his DMD from Washington University School of Dental Medicine. After graduation, he joined his father and uncle at the Simpson Family Dental practice in Blackfoot.

Mike married his high school sweetheart, Kathy, and they have been married for 50 years. He is an avid golfer and reader who also enjoys painting and experiencing the exceptional scenery Idaho has to offer, with Kathy and their dog Charley.

As your Congressman, I will continue standing up for and fighting for Idaho’s conservative values in Congress while fighting to stop the liberal Biden and Pelosi far-left socialist agenda. I have an “A” rating with the NRA and a 100% rating with National Right to Life. I voted for President Trump’s agenda in Congress and stood up to the radical liberals both times they tried to impeach him. In Congress, I’m fighting every day to balance the budget, secure the border, stop inflationary spending, ensure our elections are secure, and put America first.

As your Congressman, I will continue being a strong champion for Idaho’s producers, farmers, and ranchers. I have authored billions of dollars in cuts to the EPA to stop overreach, fought to delist wolves from federal protection, introduced and passed legislation to address workforce needs, and stopped Democrat attempts to pass a death tax that would make it impossible for families to pass on their farms to the next generation. I will continue fighting for Idaho’s agriculture industry as I’ve done my entire career.

As your Congressman, I will stand up to Joe Biden and Nancy Pelosi’s attempts to take away our hard-earned money through endless tax hikes. I have voted against, and will keep fighting, the Democrats’ out-of-control spending which has shocked our economy with rising inflation. I have voted to pass a balanced budget amendment to the Constitution to get our trillions in debt under control, and I will continue standing up to Democrats’ spending agenda that would turn America into a socialist country.

Submission: Yes
“I have read the Idaho Constitution and the Idaho Republican Party Platform. Except for the provisions specifically noted below, I support the Idaho Republican Party Platform and accept it as the standard by which my performance as a candidate and as an officeholder should be evaluated. I certify that I am not a candidate, officer, delegate or position holder in any party other than the Republican Party.”
I agree to the Idaho State Constitution and the Preamble of the Idaho Republican Party, which I strongly support. I am a proven conservative and proud of my consistent “A” rating with the NRA and 100 percent rating with National Right to Life. I have always been a fierce and effective champion for Idahoans, including our producers, farmers, and ranchers. I have authored billions of dollars in cuts to the EPA, authored legislation to delist the wolves, kept sage grouse from being listed as an endangered species, and stopped Democrat attempts to pass a death tax that would make it impossible for families to pass their farms to the next generation. I’ve fought, and continue to fight, Joe Biden and Nancy Pelosi’s extreme policies and out-of-control spending agenda that is driving inflation and would turn us into a socialist country. I have blocked Biden and Pelosi from taking away our hard-earned money through endless tax hikes. I co-sponsored the Balanced Budget Amendment to stop the liberal Democrats insane spending and get our national debt under control. I stood up to the radical liberals and voted against their sham efforts BOTH times they tried to impeach President Trump. I have a proven record of being a common-sense conservative, and I voted for President Trump’s agenda in Congress 94% of the time. I was a proud supporter of the largest tax decrease in US History put forward under President Trump’s leadership.


I have chosen not to go word by word through the platform for the simple reason that these short statements cannot possibly accommodate the nuance that is inherent in the legislative process. I am happy to disclose that I disagree with efforts to repeal the 17Th amendment in Article 1, Section 3. I do not support repeal of the 17th Amendment. I believe Idahoans should have the right to elect their United States Senators in lawful State elections. Article 1, Section 4: I do not support the switch to the Gold & Silver standard of the Federal Reserve (I do support auditing the Federal Reserve). Article XIV, Section 3: I support the position of the National Right to Life Committee (NRLC) on abortion issues, which is when the mother’s life is in danger. I have a 100% voting record with NRLC and an A+ rating from the Susan B. Anthony List, a pro-life group that opposes abortion.


I agree with almost every other policy statement in the platform, but I am worried that the policy statements do not cover certain details important to making a fully informed and complete disclosure. I appreciate the right of primary voters to know where candidates stand and thank the party for allowing me to submit this short statement. I encourage all Republicans to call my campaign office or visit www.simpsonforcongress.com if they have any questions about my stance on any issue.