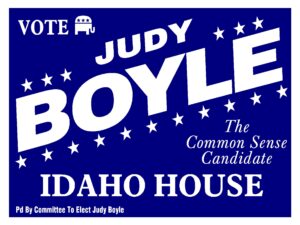 My voting record reflects that I am an unapologetic conservative whose principles are based in the Bible and the Constitution. My family has been involved in agriculture for seven generations which include my grown son, daughter and two grandsons. Natural resources and agriculture are two of my lifelong passions. I was taught that all new money comes from the earth, whether mined or grown.

I have been a 4-H leader, coached Little League T-ball, was a substitute teacher, helped start the Ronald McDonald House, served as a St Luke’s NICU support parent, loved and encouraged the numerous children with whom I have come in contact.

My Grandfather taught me the Constitution and Patriotism and that our form of government is not a spectator sport. I am a lifelong Republican, always helping our candidates and being a watchdog on government operations. I have received the state Republican Party Legislator of the Year award.

I worked for Congressman Helen Chenoweth as her Natural Resource Director, was a substitute Idaho senator for 2 years, legislative lobbyist for the Idaho Farm Bureau, and won the House District 9 seat beginning in 2009. I have served on Education, H&W, natural resources, agriculture, Federalism, and numerous interim committees and working groups. I am also a freelance writer.

Believing the Second Amendment is the enabling language for our Constitution and Bill of Rights, I have written and sponsored many of Idaho’s Second Amendment protections. Idaho has moved up from 18th to the number two state regarding the Second Amendment. Arizona is number one due to their amazing public gun range. I have always had an A plus from the NRA and am one of a select few state legislators to have received the NRA national “Defender of Freedom” award.

I have written and sponsored nearly all the laws regarding the protection of wildlife and livestock from wolf predation including working on the 2002 Wolf Management Plan when I was a substitute Senator. As a lifelong sportsman from a family of sportsmen, I also authored and sponsored Idaho’s Constitutional Amendment on the Right to Hunt, Fish, and Trap.

I have worked to protect the Right to Life, private property, and taxpayers which is why I am endorsed by Idaho Chooses Life, Right to Life Idaho, and the Idaho Farm Bureau. Idaho Chooses Life awarded me their “Friend for Life.” The Idaho Farm Bureau and other agriculture groups have given me numerous awards and the State FFA has made me an Honorary Member. I have a 100% rating with the American Conservative Union who run the national CPAC conference each year.

This year I was able to help write and sponsor an education bill giving educators the tools to effectively recognize and teach reading skills to the 20% of our students with dyslexia. I also responded to parents’ requests by writing and sponsoring the law where school boards must have curriculum review committees in which half the members are parents. Hopefully this will help with parent/school communications and relationships.

Top issues are property taxes, parental rights, and fighting illegal drugs pouring into our state. Property taxes are local control, however the legislature must find solutions. Growth must pay for itself and not on the backs of existing homeowners. The large state surplus which could be used for property tax relief, plus the state must end forgiving sales, use, and property taxes to huge companies like Facebook. The Farm Bureau & I are working to keep farmland in agriculture while respecting property rights. Canyon County has the most premium seed growing land in America shipping seeds across every continent. Food security is national security.

The family is the glue holding society together. Parents are their child’s first teacher who love and know their child better than any government entity. Parents rights should be protected and respected. The legislature should strengthen parental rights laws. A legislator’s job is to stand between an intrusive government and a citizen’s rights, not protect the bureaucracy when it is wrong.

The huge increase in illegal drugs is harming our citizens. I have long advocated sending state money to our local Sheriff offices, especially those in rural parts of the state. This is a proper role of government unlike giving away tax dollars to the wealthiest corporations. Many rural counties contain mostly federal land which doesn’t pay property taxes so the Sheriffs are underfunded. These illegal drugs are a war against our precious children and we need to do everything possible to stop this.